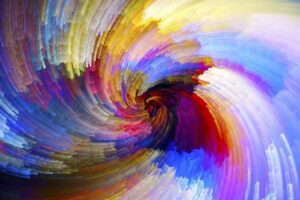 There was nothing more to do. Three millennia of desperate effort spent in vain. We opened the doorways and begged them to listen to reason. All who agreed we relocated to other planets, but a mere fraction of the population believed us and even fewer walked through our portals. I told myself we did everything we could. We gave them choice, and choices are sacred even when they tear at your heart. My involvement had been minor since I was still a novice in monitoring planets at risk, but I knew well the Guardian chosen to perform the act of mercy. I couldn’t bear for her to wait alone, so at the end I returned.

When Aberash saw me, she smiled. The sky above her lightened. “I did not expect you,” she said.

“I cannot assist,” I answered.

“Of course not.” Aberash moved closer as if she meant to touch me. She was always unfailingly kind. “Only one who has lived there can perform this task. It is a sacred principle.” She glanced at the blue globe, so tiny and vulnerable in the blackness. Its companions were distant and bare; its sun shone a sickly yellow. “It helps that you came.”

I inclined my front end toward her, the best simulation of a bow I could manage in my current form. Desperate to share her burden, I said the first thing that came to mind. “What was it like to live there as a human?”

“I incarnated into several human bodies,” she said. “First as a child in a family who feared truth so much they worshipped silence.”

We live by truth, so I asked, “Were you afraid?”

“Always.” She paused. “Everything left unsaid pulsed under my parents’ words, twisting their meaning. Beneath the surface, darkness reigned. Under the weight of silence, the darkness congealed and dwelt in the house as a gelatinous blob the color of raw liver. A fine sheen of sweat appeared on its skin when it wanted to speak. With no tongue, that was impossible. Its agony terrified me.”

Sparks smoldered in her emerald eyes. “Why did you come, Kama? You have long evolved past the experiences of humans.”

She knew my role could easily be that of witness even though her stature made that role unnecessary. The question might have been a test, so I murmured platitudes about preserving memories of the past. I had never lived on this dying world, but mine was similar enough that I grieved with her. So I told myself.

Aberash gazed at the planet hanging so lonely in space. “Don’t forget. Darkness unchecked kills. The light of reason cannot survive an onslaught of lies such as those people bewitched themselves with. Not after the midpoint has been crossed.”

I promised to remember.

Time grew short. Heat was spreading from the planet’s core into her mantle. We watched from a safe distance, but the effects of warming on the surface populations showed. The ice caps had melted. Freed, the water thrilled in its new form, ebbing and flowing as rambunctious tides devoured solid land. Millions must have drowned. The sea, at least, looked happy.

“A Gray One saved me.” Her voice rippled. “You remember them.” She nodded toward a distant world. My inner vision revealed the Order of Gray Ones—tall and narrow in their natural state, but capable of changing form as easily as a wave breaks on shore—one of the Guardian races of this doomed planet.

“He came to help. Stood outside the house where I lived, dwarfing it. I felt his love.” She sighed. “When he opened his arms, I went willingly.”

The planet commanded her attention. As heat consumed the inner mantle, her brightness dimmed. “He showed me that the house where I lived was a construction of mind, mapped by human brains interpreting light. As an incarnate, everything I perceived as solid was a trick of light—that house, my room, my parents who created thought forms sweating fear. The Gray One revealed this so I would remember my nature. Make sense of why I was there. Later, I understood.”

Her golden body darkened. I longed to touch her as the Gray One had touched the child she had once been, but arms were only a memory. “The perversion of form frightened you,” I said.

“That world could have remained as it was created—lush and green and beautiful. But thoughts of fear and lack prevailed. Hate choked love. Arrogance murdered humility. Under the surface that passed for normalcy, the sea of darkness formed by all those fearful thoughts swirled around me. In my bedroom, I dove under the covers and shook. The next day, I saw with my inner vision how my life would unfold. How I would suffer alone and be punished for speaking the truth. I cried for help, and the Gray One answered. I needed to leave that misbegotten place and return to my true home. I knew he could help and begged his assistance. That he refused, but he offered to remove my foresight until I was older.” She closed the green eyes that roamed my dreams.

“I told him to take it. I didn’t want to know my lonely future. That my mother regretted having children. That I would live a long, desolate life. That my mission to open the people’s minds would fail.”

Her face softened, and, briefly, the planet cooled. “I was the incarnate. My wishes were law. As I dozed like a babe in his arms, he took my foresight. The next morning I remembered nothing. Not even him. Not for a long time.”

“But later, you warned the population. It is chronicled in the Great Hall of Records. All the elders agree you fulfilled your purpose.”

“I spoke the truth, as prophets are trained to do. In later lifetimes, I offered the message in as many ways as I could devise.” A golden limb brushed my side. A gesture of friendship. My whole length quivered.

“It made no difference,” Aberash said. “My message sank into the darkness. Now the dark has overwhelmed what light they had and they have burned up their world.”

“Some heard.” I was pleading with her to forgive herself. “Your voice joined with others. Many who heard you and the voices of your comrades helped us open the hidden portals. Thousands found refuge on other worlds. The race will continue.”

“You helped with the evacuation. I had forgotten that.” She sounded sad. “Yes. Many were saved. I had hoped for more, but we did our best.” She dismissed her pain with a shake and faced me with blinding brilliance. “Go now, Kama. The Gray Ones will protect you.”

I wanted her to know how important her work had been, but my voice failed, so I bent myself in two as a final gesture of respect. I wanted to dissuade her from the path she had chosen, but I was far from her equal and could not imagine the ecstasy driving her choice.

From the doomed planet, I traveled to the world of the Gray Ones. They welcomed me, warming my chilled body with the fluid circulating through their translucent forms. In the distance, glowing like a star, Aberash circled her planet, a pink smudge against dark space.

“Fear not,” said the Gray One who took me under his care. “All who die are reborn.”

I didn’t answer, embarrassed at the gentle rebuke.

As Aberash prepared to strike, she elongated her magnificent form. Head, neck, and shoulders merged into a smooth cylindrical shape three times the width of the planet. Her form tapered, narrowing into a long, thin tail. Miles long. Like a snake. Like a comet. Rippling gold lit up the sky.

I forced myself to look. It was why I had come, after all, but it was also my first glimpse of how a world died, and I was only a novice. I stared into space past the ruined planet as lava erupted through its fissures and the seas boiled.

In my mind, I heard Aberash bid me farewell. To maintain my dignity, I looked directly at the drama. When she started her run, most of her disappeared in the distance. Her narrow tail whipped around the remnants of the planet—once, then again. She surrounded it like a coil—two layers thick, then three—containing its raging heat. She shone her brightest colors—red and green and violet. On the surface, to any poor souls left alive there, she would appear as blissful light come to lift the world into the heavens.

When she had circled three times, she stopped and compressed her coils. Under her pressure, the planet shrank, quivered for a long moment, then exploded. Debris shot into space, projectiles flaming red, blackened cinders.

I called for her, but got no answer. The Gray One sighed and moved closer.

It was too much to take in, but I recorded in my mind everything I saw. Later I would look at it more calmly, and my record would be stored in the Great Hall. I waited there a long time. Nothing moved but drifting embers. The planet was gone. Aberash was gone.

I was journeying home when a shock wave jostled me. I looked back. The pale sun of the decimated planet had more than doubled in size. Still, it expanded. Until that moment, I was not sure. But yes! She had done it. Aberash had thrown herself into the dying sun and merged with the mother of that system. The sun would soon engulf the remaining planets. All were unpopulated, which I knew she insisted upon before she agreed to the next step in her evolution.

But if that were not true, and billions more had died in the explosion, the fierce light of the newborn sun was so sublime, I would still have wept with joy.

The Seer was first published in Through Other Eyes by All Worlds Wayfarer, 2020